NISKAYUNA – It was a surreal ending to an exciting football game Friday, Oct. 5, at Niskayuna High School.

The Silver Warriors (2-4) took a 34-27 lead in overtime and hung on for a 34-33 victory over Colonie when the Garnet Raiders failed on a two-point conversion that they hadn’t planned on pursuing. 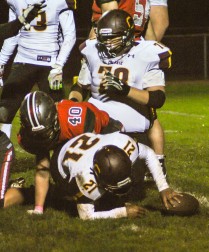 As quarterback Shai Young scored on a 7-yard touchdown run in overtime to pull Colonie (2-4) within one point of Niskayuna, running back Bryan Grimes was injured on the play. Grimes also happened to be Colonie’s lone healthy placeholder for extra point kicks.

Without a reliable placeholder, Colonie took a time out and discussed a two-point conversion attempt. After drawing up the play, the coaches headed back to the sideline, but Colonie’s players remained huddled as they gave themselves a pep talk. The referees called several times for Colonie to return to the field before the Garnet Raiders broke the huddle.

When they got to the line of scrimmage, Colonie failed to get itself into the formation the coaches drew up. Without another time out to use, the Garnet Raiders had to execute a play. Young received the snap from center, rolled out of the pocket and threw a short pass that hit his receiver, who was already lying on the ground in front of the goal line. Despite the receiver rolling over to extend the ball over the goal line, the play was whistled dead and Niskayuna held on for the victory.

“They lined up wrong, and we didn’t have any time,” said Colonie head coach Eric Rouleau. “That’s football. That’s it.” 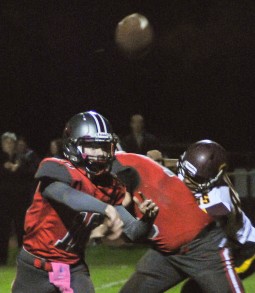 Niskayuna was staring at defeat after Colonie tailback Marcus Gibson broke free for a 32-yard touchdown run early in the fourth quarter that put the Garnet Raiders ahead 27-19. However, the Silver Warriors executed a lengthy drive that tailback Cole Wade capped with a 6-yard touchdown run with 4:58 left. Quarterback Dan Brownell added a two-point conversion run to tie the score at 27-27.

“We knew it was going to be a tough game,” said Niskayuna head coach Brian Grastorf. “We had just come off four tough games in a row. We just battled [tonight].”

Colonie was driving for a potential go-ahead touchdown late in the fourth quarter, but Niskayuna forced a fumble and recovered the ball at its own 18-yard line with 22.4 seconds remaining in regulation. The Silver Warriors tried to get the ball down the field quickly, but time ran out before they could execute a Hail Mary pass into the end zone.

Niskayuna got the ball first in overtime, and it took only one play to get six points. Brownell threw a rainbow pass to the right corner of the end zone that wide receiver Aaron Whitley hauled in for a 20-yard touchdown. The Silver Warriors made the extra point to move ahead 34-27, and it proved to be the winning point.

“We had a couple of down moments tonight, but we kept fighting,” said Grastorf.

Niskayuna struck first with a 1-yard touchdown run with 3:33 left in the first quarter, but the fireworks had only just begun. Not more than two minutes later, Brownell completed a pass to Richie Quinn, who started running down the left sideline. As he was about to be met by the Colonie defense, Quinn pitched the ball backwards, but there wasn’t a Niskayuna player there to catch the ball. Jacob Gonzalez picked up the fumble and raced 44 yards the other way to put Colonie ahead 7-6. 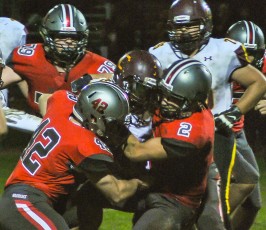 Colonie’s lead lasted all of 25 seconds. After being backed up 10 yards on a holding penalty, Brownell threw a deep pass to Nick Fratterigo, who took off on a 90-yard touchdown reception. The extra point gave Niskayuna a 13-7 advantage.

The Garnet Raiders responded with a drive that ate up more than six minutes of game clock. Young capped the series with a 5-yard touchdown run to give Colonie a 14-13 lead, which it took into the locker room at halftime.

Niskayuna and Colonie traded touchdowns in the third quarter before Gibson’s burst through the middle for six points in the fourth quarter gave the Garnet Raiders an eight-point lead.

Brownell completed 18 of his 28 passes for 311 yards and two touchdowns to lead Niskayuna’s offense. Gibson ran for 90 yards on 11 carries, while Grimes and Young combined to rush for 92 yards.

Niskayuna travels to Bethlehem on Oct. 12, while Colonie hosts Guilderland.

“We’ve got three weeks left [including a crossover game],” said Rouleau. “They have to pick their heads up, keep loving football and keep playing hard.”

For a photo gallery from this game, click here. 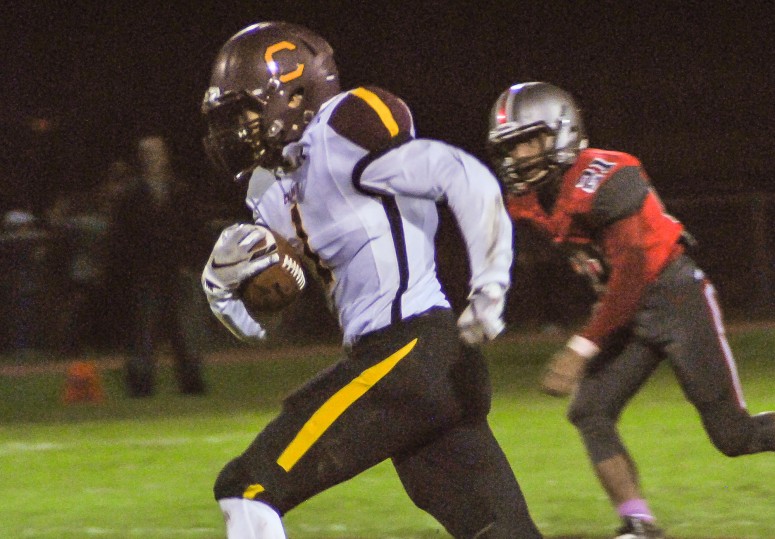