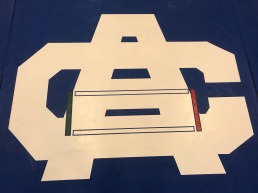 COXSACKIE – The Coxsackie-Athens wrestling team has been one of the best within the Patroon Conference in recent years. Led by head coach Ryan Palmer, the team is hoping to keep momentum from last year, when the Indians were one point away from being league champions. Palmer said he believes that their hard work and commitment will get this team over the hump and become league champions this year.

Coxsackie-Athens wrestler Devon Shader had a breakout season last year, going 39-3. Shader placed fifth at the Section 2 tournament, and he is hoping to improve on that performance with a Sectional championship in his future. He is also a leader for the younger kids on the team, and it shows in practice. They look to Shader as a coach, and when he is trying to teach them a new move or a slight adjustment, they listen.

“I’ve put a lot of off-season work in, and Coach Palmer has really been pushing me,” said Shader. “I’ve also put in off the mat work with Coach John Cox and Joe Ucelinni up at Curby 3 Style Wrestling.”

Palmer said he hopes Shader can stay humble. “He’s hungry, and he been putting in the work. Confidence over cockiness is what I’m going to be preaching to him this season,” said Palmer.

Another Coxsackie-Athens wrestler opponents should watch out for is Marc Martinez. Palmer said he wholeheartedly believes Marc can win the Section 2 Championship.

“I have nothing except high expectations for Marc. For him, it’s Section 2 championship or bust,” said Palmer.

Martinez was one match away from that accomplishment last year, losing in the Sectional finals. He then attended an off-season national tournament in Fargo, N.D. Palmer says that’s what is going to get Martimez over the edge – by learning how to attack.

Martinez said he is ready for a big season: “Patroon Conference championship or bust – no in between.” He also hopes to leave behind a legacy on the program for years to come.

“I want kids to try to chase me. I want to leave behind a legacy and have kids excel to beat all that I accomplished,” said Martinez. “I have a little brother coming into the program, and I hope that one day he can be a better wrestler than me. If the younger kids are better than I ever was, I succeeded as a captain.”

Coxsackie-Athens is focused on winning a championship, and the Indians are going to leave everything on the mat until they get what they want.

Connor Wood is a senior at Coxsackie-Athens High School.

One thought on “Wrestling preview: Coxsackie-Athens gears up for another run towards a Patroon Conference title”