GLENS FALLS – The Cool Insuring Arena was once again home to a day of Section 2 basketball, as Mekeel Christian Academy hosted the Sunmark Shootout Saturday, Feb. 2.

In one of the best match-ups of the day, Schalmont upended Troy 78-76 in a battle of the top teams from the Colonial and Suburban councils. The Sabres built a five-point lead at the end of the third quarter, and then hung on as the Flying Horses rallied in the fourth quarter.

Shane O’Dell lit up the scoreboard with a 36-point night for Schalmont that included an 11-for-11 performance at the free throw line. LJ Randle dropped a pair of three-pointers on his way to a 19-point effort.

The game between Hudson and Notre Dame-Bishop Gibbons also went down to the wire, with the BlueHawks pulling out a 90-89 victory. The Golden Knights used a 29-14 run in the second quarter to take a five-point halftime lead, but the BlueHawks responded with a 29-19 spurt in the third quarter to gain a small advantage.

Lavon Fernandez came up big for Hudson with a 35-point night, while Dayquan Griffin contributed 20 points in the paint. Rodney Parker had 36 points for ND-BG, with Noah Foster (18 points) and Todd Williamson (17 points) adding significant contributions.

Earlier in the day, Albany Academy fended off Francis Lewis 82-76 behind 37 points from August Mahoney. Andre Jackson netted 14 points for the Cadets, who are ranked No. 1 among Class A teams in New York State.

Green Tech held on for a 67-62 victory over Ballston Spa. Demani Benjamin had 18 points, and Kemore Johnson added 15 points for the Eagles, who entered the fourth quarter with a 15-point lead. Keegan Zoller scored 24 points, and Luke Alteri contributed 21 points for the Scotties.

Mekeel Christian eased past Columbia 74-47, as Ozzie DeJesus and Alex Barnhill each scored 21 points for the Lions. 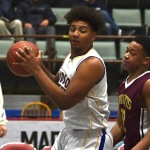